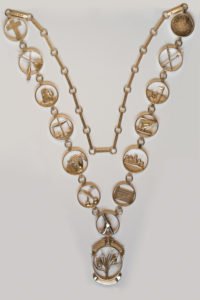 The ceremonial chain of the Manorial Court for the Hundred and Borough of Cricklade is a beautiful piece of modern sterling silver and is worn by the High Bailiff on formal occasions. It was commissioned in 2000 and was made by John Bartlett B Ed. FRSA of Daglingworth. Originally it had fewer medallions than it has at present and the design is such that further medallions can be added at a future date. The clip with the celtic knot is used when the chain is not to be worn around the neck.

John Bartlett, B.Ed.,FRSA, 4th generation Designer Maker Gold and Silversmith, left school at 16 and was a Student Electrical Engineering apprentice at Deptford London, then 5 years in RAF as an Air Wireless fitter instructor in Wiltshire. Mature student teacher St Paul’s College, Cheltenham. A beaten metal course took him to George Hart Silversmith at Chipping Campden when he registered his Maker’s Mark at the Birmingham Assay Office and later in Goldsmiths Hall Assay Office London. He was privileged to work and learn at the Harts during School holidays for the next four years. Then a year full time Crafts Design course at Goldsmith’s College London and evening course at Central School of Arts and Crafts in semi precious Jewellery at Holborn. In 1984 after 23 years’ teaching he took early retirement to work full-time at his craft as a Gold and Silversmith working on commission only. Designing and making chains and badges of office, church silver and domestic silverware and anything from a chalice to a thimble.

Welcome » The Court » The High Bailiff’s Chain
We use cookies to ensure that we give you the best experience on our website. If you continue to use this site we will assume that you are happy for us to use cookies.OkPrivacy policy