After the Norman Conquest the system of feudal landholding required the lord of the manor to provide a court for his tenants. In 1156, the Manor of Cricklade was held by Warin FitzGerold, the earliest known lord of the manor. By 1245, the Manor, now referred to as the Hundred and Borough of Cricklade, had passed to Baldwin de Redvers, seventh Earl of Devon at the age of 10.

Baldwin died childless and was succeeded by his sister Isabella, wife of William de Forz, sixth Earl of Aumale. This lady, who was as a widow the wealthiest woman in the country, employed as her man of business that most notable rogue, Adam of Stratton. From 1277 Adam held under Isabella, the manor of Sevenhampton, the chamberlainship and Cricklade Hundred and Borough courts. The Hundred and Borough remained in his hands until his forfeiture in 1289, when they passed to the Crown and whence they were assigned as dower to a succession of queens. 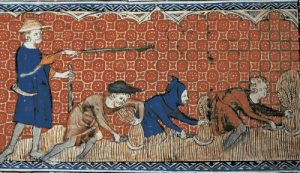 At this point a few words explaining the various terms might help. In medieval England criminal jurisdiction was held by the hundred courts; the country was divided into hundreds and there was a hundred court for each of them. Each hundred comprised 100 hides, with each hide being an area of land of variable size that is enough to support one entire household. A tithing was an area of 10 hides, which therefore originally corresponded to about 10 households. The heads of each household were judicially bound to the others in their tithing by an arrangement called frankpledge, which created collective responsibility for behaviour within their tithing. The hundred court monitored this system in a process called ‘view of frankpledge’, with the tithing reporting any wrongdoing in their area and handing over the perpetrators among them. If the wrongdoing was minor it would be dealt with by the hundred court, but serious crimes were passed up to the shire court.

Before feudalism, hundred courts had also dealt with administrative matters within their area, such as bridge repairs, road conditions and so forth, but the manorial courts had largely superseded that in practice and some manorial lords began claiming authority over criminal matters as well. Eventually, the king formally granted certain trusted lords with the legal authority that had been held by the hundred court over the tithings in the lord’s manor; the most important of those being view of frankpledge. The group of tithings that were located within each manor had come to be called a leet and hence in the later Middle Ages these judicial powers came to be called court leet.

The court leet was presided over by the lord’s steward or bailiff and the first known bailiff for the Hundred and Borough of Cricklade was Roger de Writele in 1275.

Both the Lord of the Manor and the Bailiff can be traced over the years to the present day. In 1842 Joseph Pitt and others conveyed to Joseph Neeld of Grittleton, the Hundred, the Borough and the Manor of Cricklade. It has since then remained in the Neeld family and the present Lord of the Manor is Michael Neeld, which he inherited from his father, Ralph Neeld, in 2010

The term “Bailiff” became known as “High Bailiff”, possibly from the time of Joseph Pitt, and the current High Bailiff, appointed in 2006, is Clive Smith.

Welcome » The Court » Our History
We use cookies to ensure that we give you the best experience on our website. If you continue to use this site we will assume that you are happy for us to use cookies.OkPrivacy policy